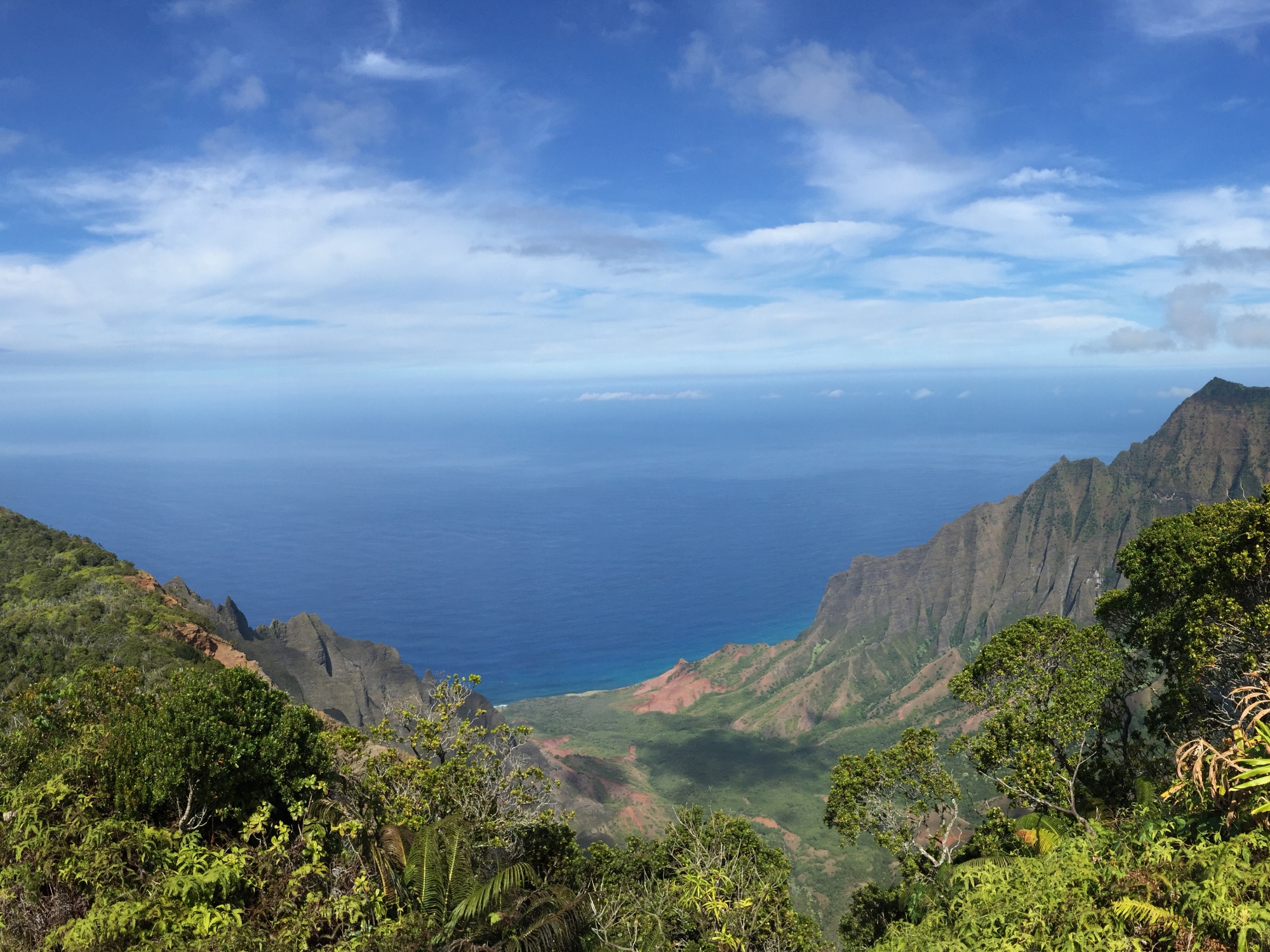 Known as the Garden Isle, the island of Kauai is one of the smaller, quieter islands in the Hawaiian chain. If you are looking for nightlife and action, it would be best if you looked elsewhere because when we were in Kauai, almost everything seemed to be closed down by 10pm. But if you are looking for adventure and unparalleled natural beauty, Kauai is the perfect spot.

Kauai is quite small and you could probably drive around the whole island in 2.5 hours, but I would recommend taking your time to explore each region as the landscape changes drastically from one region to the next. From palm tree covered beaches, to lush tropical rainforests, powerful waterfalls and dramatic cliffs, to the Grand Canyon of the Pacific, Kauai has it all.

East Side of Kauai

We based ourselves in Eastern Kauai in the town of Lihue, not too far from the airport. We found it was a fairly central spot to allow us to easily access both sides of the island.

After a late night arrival the day before, we decided to take it easy on our first day in Kauai. We had a leisurely breakfast at Lava Lava Beach Club and walked along the beach near the hotel. Easily accessible from the main highway, Opaeka’a Falls was just a short drive away and a great introduction to the beauty of this island. The falls are 151 feet tall and there is a convenient lookout just off the road from the parking lot.

Wailua Falls was a bit further away from the main highway but was worth the drive as you get a spectacular view of the falls from the viewpoint. Many may recognize these falls from the opening credits of the TV show “Fantasy Island”. We saw a few people swimming in the pool at the base of the falls but we weren’t prepared for the slippery steep trail down the cliff, so we had to be satisfied with the view from the top.

Wailua River and Hike to a Waterfall

Opaeka’a and Wailua Falls were just the first of many waterfalls that we had the pleasure of visiting on our trip to Kauai. One of the most memorable activities was a kayak tour up the Wailua River and a very muddy hike to Secret Falls (also known as Uluwehi Waterfall). There are a number of companies that offer similar excursions and we went with Kayak Kauai and the Wailua Sacred Falls Tour. This was a five hour tour where we were set up in two person kayaks and we paddled our way up the Wailua River. The river was calm and it was a scenic leisurely paddle up river past an old Hawaiian village and deep into the river valley.

We tied up our kayaks by the edge of the river and started our trek through the tropical rainforest. We were advised to wear runners or water shoes as the trail can get extremely muddy. This was not an exaggeration as some of the members of our group were forced to go barefoot or their flip flops would have been lost in the thick mud. Other than the mud, the trail was fairly easy going and followed along a small stream that feeds into the Wailua River. Our guide pointed out all the local plants and flowers along the way before we arrived at an idyllic 100 ft waterfall. We stopped here for lunch and couldn’t leave without going for a swim. The water was ice cold and the rocks were very slippery but this was the quintessential Hawaiian experience.

This pretty sandy beach on the north-east side of the island is in a quaint residential neighbourhood. If there is an Airbnb nearby, this would make the perfect secluded hideaway. On the day we visited, there were only a few small groups enjoying the beach and although the sun was out, the windy day made it a bit too chilly for sunbathing. Fans of older TV shows may also recognize this beach from the opening credits of Gilligan’s Island. The beach can be reached by taking the turn off from the highway by the Moloaa Sunrise Fruit Stand. As the beach is right by a local neighbourhood, there is very limited parking.

Other things to see and do in Eastern Kauai:

The North Shore of Kauai was probably my favourite area of the island. The towns were small and quaint, and it was incredibly lush and beautiful. It was everything you expect of the Hawaiian islands.

The Napali Coast consists of huge cliffs and narrow valleys which are only accessible by boat or on foot. The cliffs are strikingly beautiful and were the most memorable views of our trip. The Kalalau Trail is a challenging 11 mile trek which traverses 5 valleys and cliffs and ends at secluded Kalalau Beach. The hike will generally take a full day so most hikers will spend a few days camping to enjoy this secluded area of the coast.

One day I will hike the length of the Kalalau trail, all the way to Kalalau Beach. For this trip we made it as far as Hanakapi’ai Beach where we stopped to relax, take pictures and eat the lunch we had packed. No chance for a dip in the ocean as the waves were too big, but the incredible views of the beautiful Napali coastline were worth every minute of the grueling hike. You will need to wade through a stream to get to the beach but the stream can become impassable in rainy stormy weather.

You can reach the beginning of the Kalalau trail by driving to the very end of the highway. Recently the park has implemented an entry voucher system which only allows 900 visitors into the park per day. Parking vouchers are also available for a fee but there are only 70 spots available for visitors as 30 spots are reserved for locals. The trail can also be reached by the Kauai North Shore Shuttle, taxi, Uber, or private drop-off.

This beautiful sandy beach is located at the very end of the road (as far as you can drive on the North Shore of Kauai) right by the Kalalau trail head. It is the perfect place to take a refreshing dip in the ocean after hiking the Napali Coast. We rested our weary legs, enjoyed the sun and cooled off in the calm water. The huge waves in January were broken by the natural reef leaving calm swimming pool like conditions.

Located in the beautiful northern town of Hanalei, the Hanalei Pier is a popular meeting place and centre piece of Hanalei Bay. The original pier was built in 1892 and was used for transporting rice onto ships. The pier also became famous when it was featured in the film, South Pacific.

This scenic lighthouse has beautiful views of the ocean and waves. It is also a wonderful area for birdwatching. You have a chance of seeing the red-footed booby, Laysan albatross and wedge-tailed shearwater.

Other things to see and do in the North Shore of Kauai:

West Side of Kauai

The west side of Kauai felt like a completely different island compared to the rest of Kauai, especially the dry barren landscape of Waimea Canyon.

The cliffside drive through Waimea Canyon revealed stunning views of the “Grand Canyon of the Pacific” and Waipoo Falls. The canyon is not nearly as big as the Grand Canyon in Arizona but it is still impressive at 10 miles long, 1 mile wide and 3,600 feet deep. It was formed by erosion from the Waimea River and there are several lookouts to capture the amazing views of the red rock canyon and waterfalls.

The top of Waipoo Falls can be reached by an easy 2 mile hike on the Waipoo Falls Trail. Although the trail does not provide a close-up view of the 800 ft falls, you can reach a small waterfall and pool at the top of the falls as well as unparalleled views of Waimea Canyon. If you walk across the small pool just behind the main waterfall, you will notice the scent of wild ginger which grows next to the stream. Just past this little pool you can follow a small path that takes you to the very top of the 800 ft falls. The waterfall itself can be better seen from the viewpoints along the road.

The very end of the road past Waimea Canyon in Kokee State Park takes you to Kalalau Lookout which offers an incredible panorama of the western edge of the Napali Coast. It is quite a different view than that of Waimea Canyon and it is the highest viewpoint at 4,000 feet.

Other things to see and do in Western Kauai:

Although we didn’t stay in the South Shore of Kauai, it felt like it would be the best place to stay if visiting with family.

A lovely family friendly beach where you can snorkel, swim or just relax on the beach. There were a few monk seals also lying out in the sun enjoying this beach as well. The monk seals are a common sight on this beach but it is respectful to keep a distance from these endangered animals.

Sprouting Horn is a blowhole that comes to life when the waves hit this lava tube. We spent some time here trying to capture the spray which can reach up to 50 feet. This was also a good vantage point to spot whales during whale watching season from December to May.

We visited McBride Gardens on our last day in Kauai before our late night flight. From the Visitor’s Centre, you hop on a tram which takes you on a short drive to the McBride Gardens where you can wander the grounds on your own self-guided tour. These gardens have the largest collection of native Hawaiian plants in the world. The gardens were beautiful but we had to cut our visit short as the mosquitos were eating me alive.

The Allerton Gardens is adjacent to the McBride Gardens and were designed by the Allerton family starting in 1938. As with much of Kauai, the gardens were the backdrop for a number of movies, most famously the Moreton Bay Fig trees were featured in a scene from Jurassic Park. The Allerton Gardens can only be viewed as part of an organized tour. As we had missed the time for the organized tour, we were only able to do the self-guided tour of the McBride Gardens.

After abandoning the McBride Gardens due to the mosquitoes, we were told we should be able to make it in time for the farmer’s market at Kukui’ula Village Shopping Center. The shopping center was quite a nice open area shopping experience, with local shops, art galleries, restaurants and a grocery store. Once the farmer’s market got going, there was live music and a number of stalls selling fresh fruit and vegetables. We bought some Hawaiian salt and couldn’t resist getting another Hawaiian shaved ice.

Other things to see and do in the South Shore of Kauai:

By far the best thing we did in Kauai! Not being a very good flyer myself, I was a little nervous about the helicopter tour at the beginning. But as soon as we lifted off the ground, I felt like I was on a magic carpet.

There are a number of helicopter tour companies on the island, but we went with Blue Hawaiian Helicopters. Our tour took us to Jurassic Park falls (Manawaiopuna Falls), through the Waimea Canyon and over to the Napali Coast and Hanalei Bay. We even took a detour when our pilot spotted a whale just off the coast. As much of the island of Kauai is unreachable by car, the helicopter tour was the perfect way to see this picturesque island.

2 thoughts on “Island Paradise of Kauai”